Hattie and her family lived plastic-free for a week: it's harder (and more expensive) than you think

Hattie with her plastic-free haul CREDIT: ANDREW CROWLEY
Last week, the Prime Minister vowed to crack down on “one of the greatest environmental scourges of our time” and eliminate all “avoidable” plastic waste within the next 25 years. In the UK alone, she said, the single-use plastics thrown away each year would fill the Royal Albert Hall 1,000 times over.

I believe it. Because in my own dominion – albeit a family of four in a small terrace house – we are drowning in plastic. The floor is strewn with plastic toys. For this, I can blame the kids (aged four and seven).

But in my fridge too, nearly every item is packed in the stuff (including a plastic tray in which each piece of Parma ham is blanketed by its own plastic sheet).

The bathroom is packed with potions and lotions in plastic. I have a cupboard entirely devoted to “bags for life”.  This cannot continue.

Unlike the PM, however, I decide not to wait until 2042, but to call the children and my husband downstairs and announce an immediate ban on all single-use plastic packaging. For a week, at least.
Here's what happened...

According to the Cucumber Growers Association, 490 tons of plastic is generated every year, merely to cover cucumbers in British shops.
Lidl has just been slammed for selling “naked onions” – that is, onions that have been peeled, then placed in plastic to preserve their dignity – while Marks & Spencer has stopped selling “cauliflower steak” after customers pointed out it was just a couple of slices wearing a herb dressing, plastic wrapper and higher price tag.

I head to Waitrose to buy fruit and veg, and make my first mistake: taking a ravenous four-year-old. She points to a plastic punnet of raspberries.

“Now, why can’t we have those?” I ask, piously. “Because fishes’ tummies end up full of plastic,” she intones, leadenly.  An estimated 12.7 million tons of plastic end up in the world’s oceans each year – thus, plastic is now found in a third of UK-caught fish.

Frida knows this because I gave her a lecture in the car about it. She is, however, struggling to empathise with the cod because: “My own tummy is empty,” she points out, threateningly.

So we pick up loose bananas. At 14p each, these are nearly 3p cheaper than those wrapped in plastic. However, it costs nearly 10p more to buy each of our apples now that we cannot buy their bagged cousins.

This, it turns out, is typical. Last week, a study found that over half of supermarket vegetables are cheaper if wrapped in plastic.  Despite being resigned to pay more, we leave without a quarter of our shopping list. Frozen peas (the children’s staple vegetable) are obviously out. Cucumbers are, indeed, near impossible to find unpackaged. Lettuces too. And celery, berries, grapes…

The local market proves more, well, fruitful. We emerge with a perplexing array of root veg and cabbages. Of course, I have no idea what I’ll cook, and I have just devoted two hours to hand-selecting loose items that I usually purchase in a few online clicks. 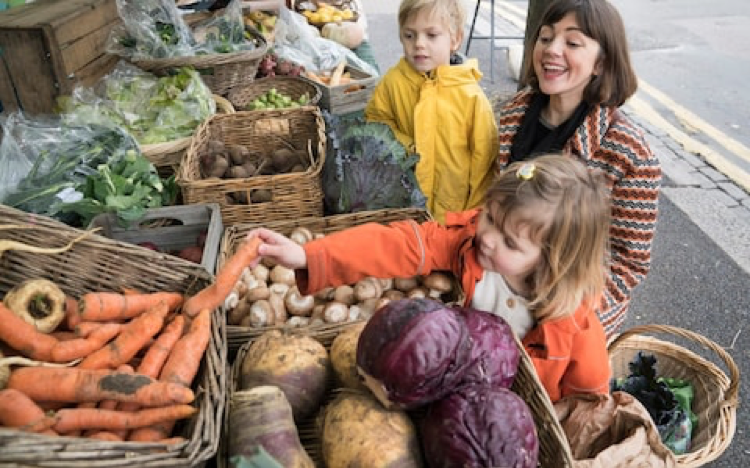 Seeking advice, I call Alice Guy, MD of video games company PaperSeven and mother of two, who survived the whole of 2017 without plastic. “When you start, it feels like a marathon,” she says, “but once you find your shops and routines, you get really addicted.”

You cannot, she explains, shop spontaneously when plastic-free. Instead, she spends part of each Saturday writing a weekly meal plan, then hitting the various shops near her East Sussex home where she knows she can get things without packaging.

“There’s only one place I can buy celery without plastic,” she says, “and another where I can get cucumbers.”

Now that Alice has planned her route, she thinks shopping this way adds only a little time – and enormous satisfaction.

“I think about the huge volume of plastic we haven’t generated,” she says, “and the fact that about 95 per cent of the money I’ve spent has been at local businesses, going back into the local economy. I’d never preach to others about our way of life, but it’s hugely rewarding.”

Half way through the week, I am woken to the sound of my two children, leaping up and down and screaming: “He’s been! He’s been!”

No, not Father Christmas, one month late: the milkman.

Two days previously, we had run out of milk. All the supermarket supplies came in plastic bottles, so I bought soy milk in a cardboard container and placed an order with the milkman. It being Friday evening, he couldn’t deliver till Monday, so the children endured 48 hours of “torture” without cow’s milk.

Our new, glass-bottled milk is expensive (99p a pint, compared with 60p for Sainbury’s plastic-bottled version). But this seems important since I have received an email from Helen Bird, recycling and collections adviser at the waste-reduction charity WRAP.

“Around 3.7 million tons of plastic is placed on the UK market each year,” she says. “Of this, packaging accounts for 2.2 million tons.”  The worst offender, she explains, is the plastic bottle, which accounts for 39 per cent of the packaging consumers use. Pots, tubs and trays make up 34 per cent and films 27 per cent.

Globally, our plastic bottle addiction means we buy a million every minute. Fewer than half of the UK’s end up in recycling. Instead, more than 16 million are burnt daily, or left to litter the landscape or oceans.

Armed with this information, the nuisance of remembering and carting around reusable water bottles seems negligible. I add a reusable coffee cup to my bag, too.

Then, I discover there is plastic in my tea bags. Eliminating plastic is hard now that it is so ubiquitous – you can’t even see its presence in some products.

This thought depresses me, until I remember that there is one drink that comes almost entirely in glass: wine. The virtuous are rewarded after all.

It is, I discover, relatively easy to buy meat and fish. Not on the supermarket aisles, of course, but at the deli counter a kind, if mildly amused, assistant agrees to put my salmon and sausages directly into the paper package, foregoing the usual plastic film.

My local butcher and fishmonger are equally affable, even after I pedantically object to the sticky labels sealing their paper parcels. The only hurdle is ham. I cannot find anywhere selling it unpackaged. Our sandwiches look sad.

In Tesco, I catch my husband casting furtive glances at his beloved, plastic-enshrined Parma ham.

On Tuesday, Iceland announces it will become the first supermarket to eliminate plastic from all its own-brand products.

This week, however, it proves impossible to buy most dry goods in the major supermarkets. We gaze at entire aisles of pasta, noodles and rice, their plastic wrapping winking provocatively at us under the strip lighting. Even the cereals have a plastic bag within their cardboard boxes. We buy Scotch Oats and Weetabix before retreating. Then, I spot a sign for a business called Reyouzable. Currently available only in certain London postcodes but aiming to expand, it works like this. You order unpackaged dried goods (plus some cleaning products and toiletries) via its website. They deliver to your home or a local collection point, after which you can decant your supplies from paper bag to your own jars.

I meet founder, Gavin Prentice, for a coffee. Reyouzable, he says, is less than a year old, but website traffic is now “going through the roof, partly ­because of Blue Planet”.

“We’re getting emails asking us to deliver to new areas of London, to Cambridge, and to the north of England,” he tells me. There is, however, one problem. Cost.  Four hundred grams of its organic basmati rice currently costs £2.61. At Sainsbury’s 500g costs £1.90.

“When we started, I wanted to match supermarket prices exactly,” says Gavin, “then reality set in.” Supermarkets’ vast purchasing power enables them to push prices down dramatically. Until Theresa May’s dream of “plastic-free aisles” materialises, eliminating plastic means using smaller, independent shops and services – and thus higher prices.  Gavin, however, is optimistic. Reyouzable’s growth, despite the cost disparity, shows just how sharply the tide of public opinion is turning when it comes to plastic packaging.

That growth, he hopes, will enable prices to fall fast.  Plus, he says: “You don’t have to ditch all plastic. Most people can’t afford to at present. Switch a couple of products, and you’ll help to put pressure on the big suppliers and supermarkets to make the whole thing easier and more affordable.”

The biscuits, sweets and yogurts my children crave are swathed in plastic. I promise to bake instead. Mindful that this is not my strong suit, I immediately “forget” to do so, and no one reminds me.

Instead, I take to carrying bananas and raisins everywhere. At the end of the week bananas, raisins and receipts have combined to form a resilient papier-mâché at the bottom of my handbag.

The supermarket deli counter comes to the rescue once again. I buy a thick wedge of cheddar, wrapped in paper. It disappears at an alarming rate (possibly due to the lack of other snacks), so I buy more without event at a farmer’s market.

But I have become too cocky. It seems seductively simple to buy loaves of bread in paper bags at local bakeries. On Sunday, friends are due for lunch. I read through the recipe and realise I need pitta bread.  I have failed to follow the first rule of plastic-free shopping: plan ahead.

The bakeries are closed. I am forced to buy plastic-wrapped pitta from a corner shop. The lunch tastes of failure and landfill.

At my most downcast, I stop at a local health food shop and discover, within, a treasure trove. Dried goods are housed in dispensers, from which you can fill paper bags.

There is a vat of olive oil, from which you can fill your own bottle, one for apple cider vinegar, yet another for honey and a whole “refilling station” for cleaning products of all kinds. A wave of elation washes over me.

I fill up on laundry and washing up liquid and buy bamboo toothbrushes for the children. Then, from natural cosmetics chain Lush I get shampoo, conditioner and deodorant bars in paper bags. Tilly was delighted to represent her home country of Bermuda at the CARIFTA games More...